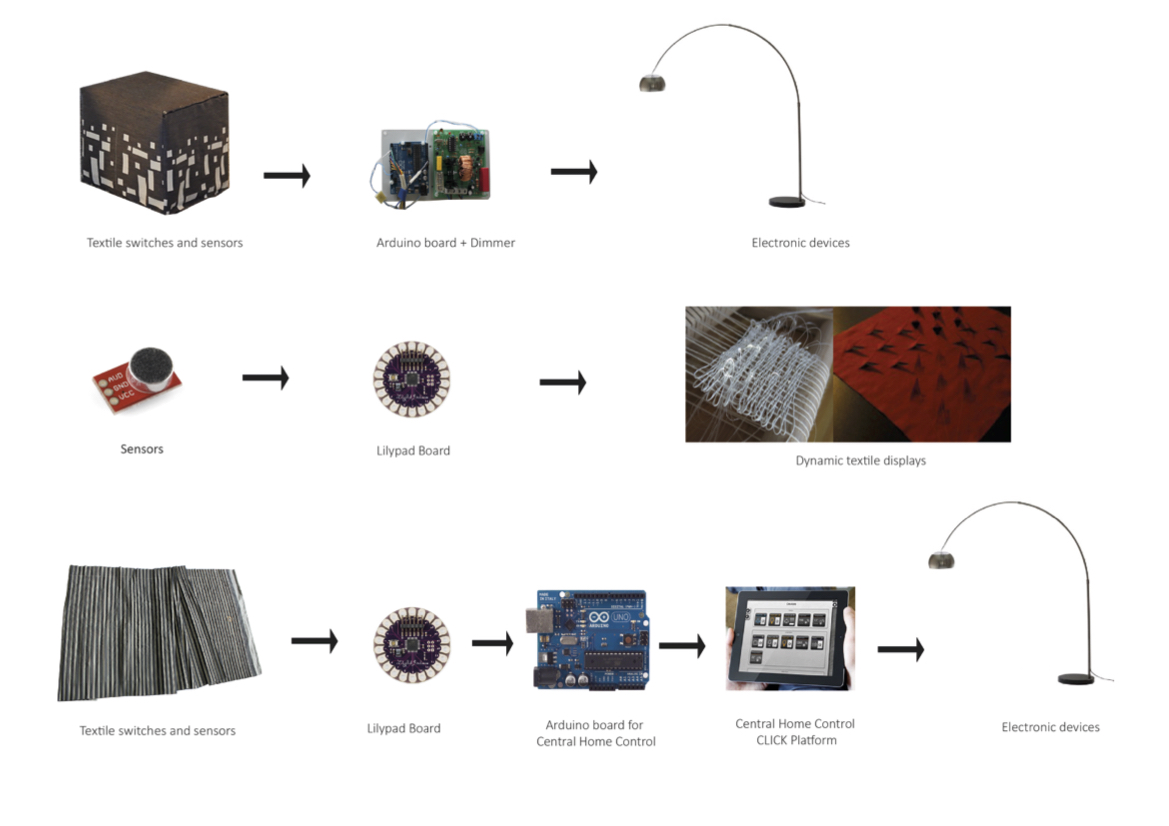 Projects developed in the frame of UHCI project, Berlin University of the Arts.

Cushion Pressure Sensors were developed as a part of the UHCI project with the aim to explore the idea of textiles switches in the form of pressure sensors, and using these to control different electronic devices. The electronic circuits are integrated directly into the structure of the fabric, either by weaving or knitting.

The woven pressure sensor is structured as a matrix and consists of two woven layers of parallel conductive lines, where one is placed perpendicularly on top of the other one. When a pressure occurs at a point were two conductive lines cross, it acts like an electrical switch. Each line is connected to a pin on the Arduino Microcontroller and the grid allows the exact pressure point to be identified.

In the knitted version the pressure sensor is made possible by using tuck stitches technique to create a three dimensional surface, with two conductive layers separated by isolated sides. When you press/sit on one of the points where the conductive threads overlap, the electrical circuit is closed and electricity (low voltage) flows through the fabric. By using two different kinds of conductive threads, one highly conductive made of copper and one silver plated with resistive qualities, we can get different resistive values and thereby also determine the position of the contact. All the pressure sensor areas are connected to the Analog inputs of an Arduino. They can be programmed together or individually according to the chosen scenario.

During CeBIT 2014 in Hanover we have invested the space of the exhibition with a series of sitting objects covered with textiles fabrics incorporating sensors and electronic circuits allowing the activation of different electronic devices in the exhibition space (in the case of CEBIT – lamps).

The scenario is based on the investigation of different ways of constructing textiles pressure and touch sensors. Knitted, weaved and embroidery structures were considered. This scenario creates the framework for a well determined interaction form, in which the different electronic devices can be switch on/off according to the presence of the users. Such textile switches can be used in situations like reading or working while sitting.

Eventually this fabric sensors involves our relation with our light – and thereby our energy – consumption. How can our home devices be more responsible and related to our real needs?

The Interactive fitting room curtain is a prototype for the Serviceplan WeShop in München, a showroom seeking to display new technologies and concepts of future retail shopping. The curtain has a sensor for open/closed and embroidered LEDs that light up and start to pulsate when the curtain is drawn, signalizing that the fitting room is occupied.

The conductive copper thread that provides the LEDs with power run in a repeat zig-zag pattern, with the positive and the negative lines running on different sides of the fabric to avoid short-circuits. The pattern is sectioned into five different groups, each group being controlled by a different pin on the micro-controller which is placed on the upper part of the curtain, together with the small battery.  On the side facing the fitting room there are a few additional LEDs, giving the customer feedback of what is happening on the other side.

The interactive fitting room curtain was designed as part of the UHCI project (Universal Home Control Interface) in 2014. 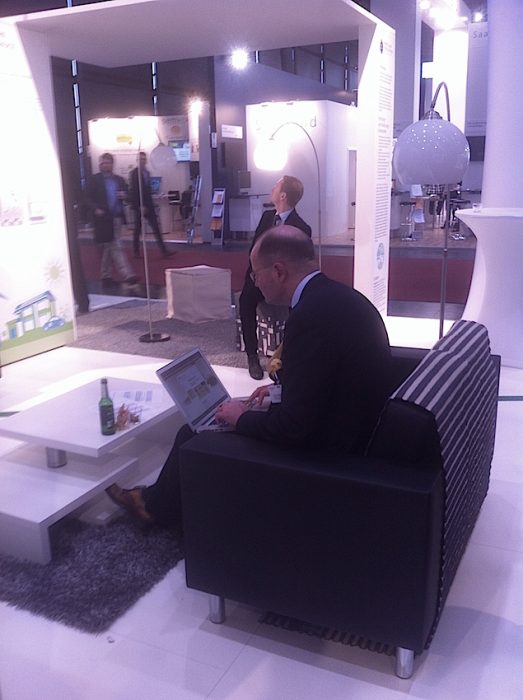