ARTISTS IN INDUSTRY. THE ROLE OF DESIGN IN THE DIGITAL ERA
November 11, 2012 |
CONFERENCES & LECTURES | CURATORIAL PROJECTS 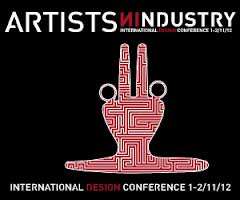 ARTISTS IN INDUSTRY. THE ROLE OF DESIGN IN THE DIGITAL ERA (2012)

Thinking critically about design is a way to understand the relationship between the contemporary person, his peers and the world – the way things are produced and consumed. This is due to the fact that the term ‘design’ today has become a prevalent theme of reflection that includes not only commercialized and consumed goods but also current practices that define our everyday life. Aside from its aesthetic value, design is today the projection screen of our lives.

Modern design cannot be separated and cannot be understood outside technological and industrial innovations. The project “Artists in Industry” is a platform that searches to bring into discussion the status of design in the current context, an analysis that needs to take into consideration historical forms of artistic and industrial production and their associated theoretical justifications. In the same time, the processes of globalization and digitalization are today phenomena with profound implications in defining the new paradigms of production and consumption.

Whishing to deepen the critical debate pertaining to the status of contemporary design and its forms of manifestation, 2580 Association organizes an international conference titled “The Role of design in the Digital Era.” The conference will take place November 1 -2 , 2012 at the University of Architecture and urbanism “Ion Mincu” in Bucharest, and will put into discussion the relationship between design, industry and economy, between design and technology. The issues put into discussion relate to the impact of digitization onto the design and production processes, the role of the designer, the status of the “consumer” and “user” in the context of a digital and globalized economy, and last but not least, design challenges brought about by the digital era.