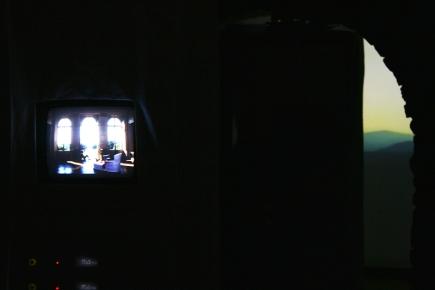 Invited exhibition in the frame of Areas of Conflu(x)ence project in Sibiu.

This work belongs to the series of Quatre saisons moins une (Four seasons minus one). The configuration of the space is the same as for the installation Eté (Summer). On one side, a little screen embedded in the wall. It shows, in magnified close-up, Ken Moody’s eyes with the double-exposure of a rock on his pupils, visible for a few seconds. On the other side, the projection of a very large image : dolly in on an autumn mountain landscape shot as a walk through the forest and up to the rock – the same rock that is reflected in Ken Moody’s eyes. The two reflections of the rock are not synchronized – as if Ken’s deep look were anticipating the passage through the landscape. I remember – or it was just a dream – of an installation at the Louvre in Paris: Watteau’s Gilles was facing Embarquement pour Cythère (Embarkment for Cythera). There was something violent and beautiful in this separation. I hope I could keep a trace in the Automne (Automn) installation. ( T.K.)

THIERRY KUNTZEL (1948-2007). Thierry Kuntzel was born in Bergerac. He studied philosophy, linguistics and semiology and prepared a PhD under Roland Barthes’ supervision. The subject of his PhD was « Making films / prospecting dreams ». He also wrote several major studies on the film theory and analysis. From 1972 to 1989, he worked at Service de la recherche de l’ORTF (ORTF Research Department) and then at INA. He also taught semiology of the cinema and film textual analysis at University of Paris 1, at IDHEC and in American universities. Late 80’s he decided to focus entirely on his artistic creations. He created his first installation in 1974, in marble and neon. He produced most of his videos between 1979 and 1980. From that date on, he created mostly installations based on image, light and sound projection. Thierry Kuntzel lived and worked in Paris.